On October 19th, the California Historical Society, along with the Labor Archives and Research Center, will host ten institutions for the third annual San Francisco Archives Crawl. The theme is “The Histories of California in 10 Objects.” We’ve selected ten objects from the CHS Collection, spanning the years 1671 to 1978, to represent the history—and mythology—of California. These objects tell complex stories of exploration and conquest, the California Gold Rush, Chinese immigration, civil rights struggles, spiritualism and women’s suffrage, and utopian/dystopian communities. 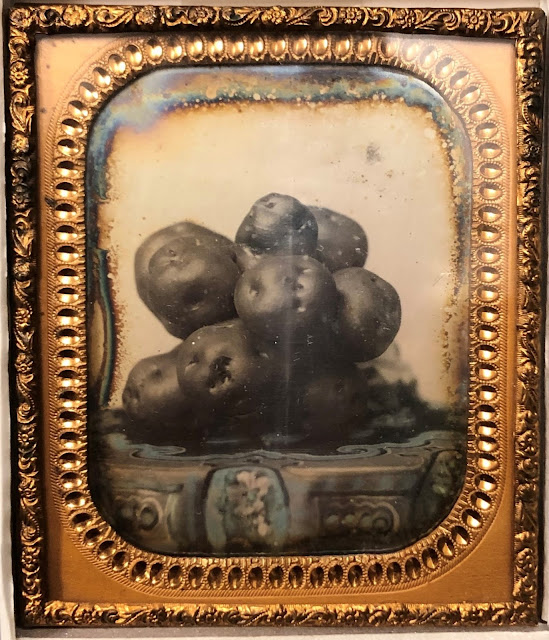 One of the featured objects is this unusual and amusing Gold Rush Era daguerreotype, depicting a pile of beautiful, carefully staged potatoes. CHS has a significant collection of daguerreotype photographs, which were recently cataloged by archivist Jaime Henderson. (See the online finding aid here for a detailed listing.) The collection includes images of Gold Rush immigrants, mining towns and scenes, women, children, and families, and mourning photographs. In a time of great social dislocation, daguerreotype photographs were exchanged as objects of sentiment and memory. The purpose of this image is unclear. Was the picture taken to memorialize an immigrant’s first potato crop? Was it sent back home, or kept by the farmer as a token? Is the picture deliberately irreverent, a sort of joke about the sanctity of photography, or was it meant to be taken seriously?
Please join us on October 19th to celebrate the San Francisco Bay Area’s archives community and California history!

at October 18, 2019 5 comments:
Email ThisBlogThis!Share to TwitterShare to FacebookShare to Pinterest

An Archbishop Stands with the Suffragists

For this year’s Archives Crawl theme, “California History in 10 Objects”, the Archives of the Archdiocese of San Francisco will feature items highlighting different periods of the Archdiocese’s history including the settlement of Catholic pioneers during the wake of the Gold Rush, Japanese-American Catholics’ experience during World War II, the Archdiocese’s response to social justice concerns of the 1960s, and its ministries and advocacy efforts during San Francisco’s Sanctuary City movement.
One featured item, a resolution issued in 1915 by the California Equal Suffrage Association written in memoriam for Archbishop Patrick W. Riordan after his death in 1914, will be displayed in recognition of this year’s 100th anniversary of Congress passing the 19th Amendment giving women the right to vote. The resolution is among the personal papers, photographs, and related materials that comprise the Archbishop Riordan archival collection which reflect his life and service as the Archdiocese’s second archbishop from 1884 to 1914. The resolution includes language praising Archbishop Riordan's support for the Suffrage Movement at a time when the Association heard “our adversaries within and without the Church were attacking us with bitter words”, and it cites examples of his public statements and actions done on behalf of the cause. Archbishop Riordan seemed to understand the political advantages that came with supporting the enfranchisement of women when, according to the resolution, he encouraged the Society of Catholic Women to organize votes against the controversial San Francisco city ordinance to remove its cemeteries, which was a significant issue of concern during the time of his episcopacy. 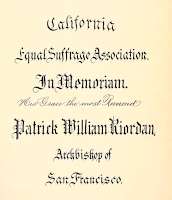 The Suffrage Association ends its multi-page resolution with the following words:

“.. all woman suffrage workers join our expression of special sorrow to that of public grief, realizing as we do, that when the Requiescat in Pace was uttered for his Grace, the Most Reverend Patrick William Riordan, we too had laid to rest a powerful friend.”

The suffragists’ resolution sheds an interesting historical light on the clerical role of a Catholic bishop, and it is one of several examples demonstrating the kind of influence the Catholic Church in San Francisco and its Archbishop had on the lives of local citizens, both Catholic and non-Catholic alike.
Read the entire resolution when you visit our table at the Labor Archives and Research Center, and learn how the Archives fulfills its mission to preserve the history of the Catholic Church’s presence throughout Northern California since before the time of statehood. For more information on the history of the Archdiocese of San Francisco since its establishment in 1853, view a video featuring Dr. Jeff Burns, former archivist for the Archdiocese, and the late Dr. Kevin Starr, California State Librarian.

The San Francisco History Center will be at the California Historical Society this Saturday, October 19th from 1-5 for the 3rd Annual Archives Crawl. We will present ten items curated from the History Center's Collections. Come see the documents/items, chat with archivists and learn more about how we're preserving local history. Highlighted here are a few items we will have on view at the crawl.

Alcalde Records
[The] Alcalde [was a] leading civil officer of local government in a Spanish (and later Mexican) municipality. He was something of a combination of mayor and justice of the peace. Hart, James D. (1987) A companion to California.

Shown below is a page from the Alcalde Records. The record includes Original Grants, (1839-1849) recorded petitions for and titles to land grants, showing notices of intention to build or establish residence, date of grant, names of grantor and grantee, lot number, district number, and description and location of grant. In Spanish and English.

Creating the illusion of depth, stereograph images present two offset two-dimensional images side by side. To the human eye these images, viewed through a stereoviewer, give the perception of a 3D image. Popular from the 1850s-1930s the sterograph was a fun medium for home entertainment. A small sampling of sterographs have been digitized and added to the library's online database.

at October 16, 2019 3 comments:
Email ThisBlogThis!Share to TwitterShare to FacebookShare to Pinterest

On Strike, Shut it Down, San Francisco is Union Town


The Labor Archives and Research Center (LARC) at San Francisco State University will be a host site for the San Francisco Archives Crawl 2019. LARC documents the history of the Bay Area’s working people and unions.  Established in 1985 through a collaborative effort of historians, labor leaders and academics, the Archives preserves and promotes the region’s rich working class history.

The intersection of race and gender with the struggle for economic justice is represented throughout the collection. Records in the Archives include material from unions representing hotel and restaurant workers; early garment worker organizing; workers in the longshore, trucking and warehouse industries; service employees in healthcare and the public sector; faculty and staff in higher education; construction trades; retail and grocery workers; newspaper and printing trades; clerical workers; and exotic dancers. LARC also holds material from labor-related organizations such as the depression-era Maritime Federation of the Pacific; California Labor School (cultural hub for the Bay Area’s progressive and labor communities during the 1940s-1950s); Committee for Support of International Trade Union Rights (solidarity efforts related to ending apartheid and the wars in Central America); the California Agricultural Labor Relations Board; Northern California Conference of the United Church of Christ (United Farm Worker organizing support); San Francisco chapter of the Friends of the Abraham Lincoln Brigade; and feminist labor groups Union W.A.G.E. and Tradeswomen.


The theme of this year’s Archives Crawl is California History in 10 Objects.  Two of the artifacts you will get to see are: 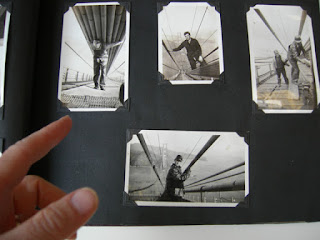 Fred Dummatzen Scrapbook. This scrapbook is a compelling personal look into the construction of one of the world’s most iconic landmarks and the human cost of construction before the advent of worker safety laws.  Fred Dummatzen was a member of Laborer’s Union No. 261 and was one of ten men killed in an accident on February 17, 1937. The album, which was partially compiled after Dummatzen's death, includes snapshots taken by Dummatzen and his fellow workers of the bridge under construction, offering an intimate window into male worker culture. There are also clippings, photographs and poems in honor of Dummatzen and a heartbreaking image of Fred’s parents holding a news article about the accident. Fred’s family donated the scrapbook during the Golden Gate Bridge 50th anniversary celebrations held by LARC in 1987. 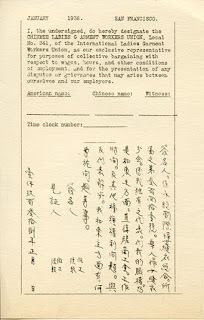 Sue Ko Lee Scrapbook. Like the Dummatzen album, the Sue Ko Lee scrapbook offers a compelling personal story, this one focused on the fight against runaway sweatshops and the exploitation of immigrant women workers.  In 1938, Sue Ko Lee and her co-workers at the National Dollar Store factory organized the Chinese Ladies Garment Workers Union Local 361. Protesting low wages, they went on strike for 105 days and eventually won a good contract. A year later the company closed the factory rather than be unionized. Despite this loss, the strike was critical in helping to break down racial barriers in San Francisco. After the factory shut down, the union helped find the workers jobs outside of Chinatown, in what had previously been white-only shops. The strike also led to Chinese workers taking leadership roles in the union – Sue Ko Lee became a business agent then secretary of the union local.  Her scrapbook was donated through the help of author Judy Yung, whose publications on Chinese women in San Francisco Unbound Voices and Unbound Feet feature chapters on the strike. The scrapbook contains photographs, newspaper clippings, and bulletins featuring lovely hand-drawn illustrations.

Come join us for the San Francisco Archives Crawl and learn more about the City’s radical labor history!

at October 15, 2019 No comments:
Email ThisBlogThis!Share to TwitterShare to FacebookShare to Pinterest

The Environmental Design Archives holds more than 200 collections documenting the built and landscaped environment. These records span more than a century, 1890-2014, and contain primary source materials such as correspondence, reports, specifications, drawings, photographs, models, and artifacts. Though the archives' primary focus is the San Francisco Bay Area, designers and projects from throughout California, the United States, and the world are found in the collections.

Since its founding, the Archives has been directed or supported by faculty members. Architect Kenneth Cardwell (1953-1972) was initially responsible for managing the archives followed by Architectural Historian Stephen Tobriner (1973-2003). Designer/ author Marc Treib (2004-2014) served as the Faculty Curator following the establishment of the EDA by Curator Waverly B. Lowell (1998-2018) the first professional archivist.

Equally integral to the Archives are holdings in American and English landscape architecture. This element of the collection originates with the donation of Beatrix Jones Farrand's Reef Point Library to the Landscape Department in the 1950s. The donation included Farrand's own project records, the garden plans of English landscape architect Gertrude Jekyll, and the records of 'Garden Architect' Mary Rutherfurd Jay. The Archives also contains the records of the founders and practitioners of the modern California landscape such as Thomas D. Church, Garrett Eckbo, Douglas Baylis, Robert Royston/RHAA, and Geraldine Knight Scott. The “next generation” of landscape designers such as Richard Vignolo, Casey Kawamoto, Jack Stafford, Theodore Osmundson, and Walter Guthrie are also held by the Archives.

At this year's Archives Crawl the EDA will showcase some of the most well-known architects of the Bay Area over the last 100 years such as Bernard Maybeck, John Galen Howard, Willis Polk, and more! We will be showing facsimiles of some of our favorite drawings of the San Francisco/Bay Area which include several BART stations, the Levi Strauss Building, the Palace of Fine Arts, the International Building, and the Golden Gate Bridge to name a few. We look forward to seeing you there and sharing our collections with you!